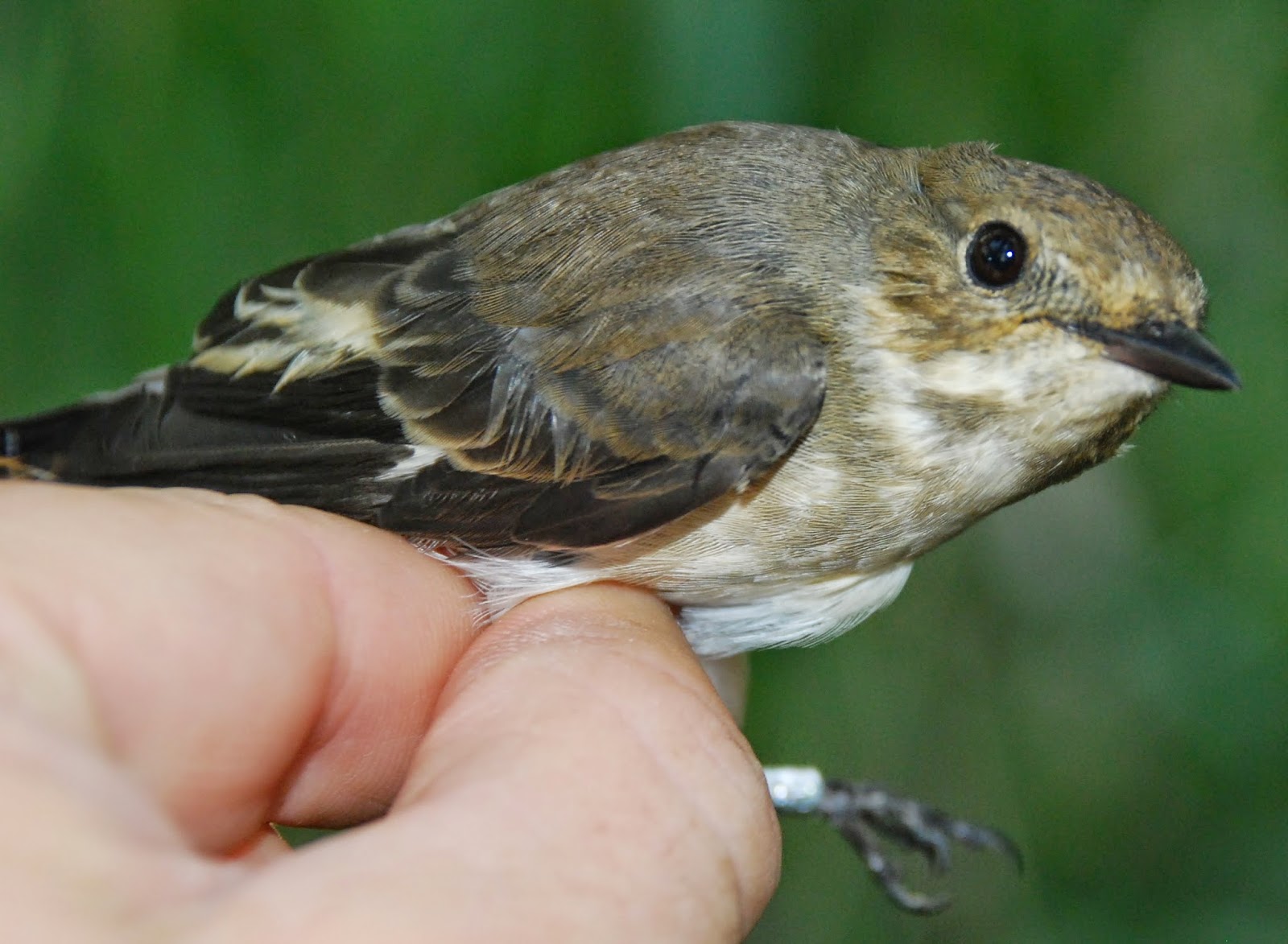 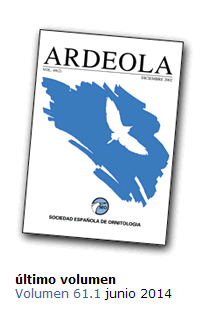 Inferring the migratory status of woodland birds usisng ringing data: the case of a constant-effort site located in the Iberian highlands

Understanding the spatiotemporal distribution of birds is crucial for effective management and conservation of their populations. However, we still have only limited knowledge not only of the wintering destinations of many Iberian breeding migrants but also of aspects as general as the migratory behaviour of the populations of many common avian species that breed in the Iberian highlands. We used bird-ringing data to shed light on the migratory status (migratory, partially-migratory or sedentary) of the breeding populations of 13 common species occurring year-round in a woodland located on an Iberian plateau (Garaio, Araba, Spain; 574 m.a.s.l.), where ringing activities have been carried out over the last 20 years. To assess the extent to which birds breeding on this site remain in the area during winter and/or are replaced by conspecifics coming from other areas, we analysed: (1) changes in relative abundance of birds between summer and winter, (2) the frequency of sedentary individuals (birds captured both in summer and winter period in the study area) in relation to the number of individuals captured only in summer (summer visitors) or in winter (wintering birds), and (3) variation in wing length among summer, wintering and sedentary birds. Our results revealed great variation among species in the intensity of migratory behaviour, and a general arrival of foreign conspecifics during the winter for most of the species studied. Likewise, our study represents an illustrative example of how long-term ringing can be used to shed light on the migratory status of bird populations.
Publicado por Pablo González-Ocio en 15:13 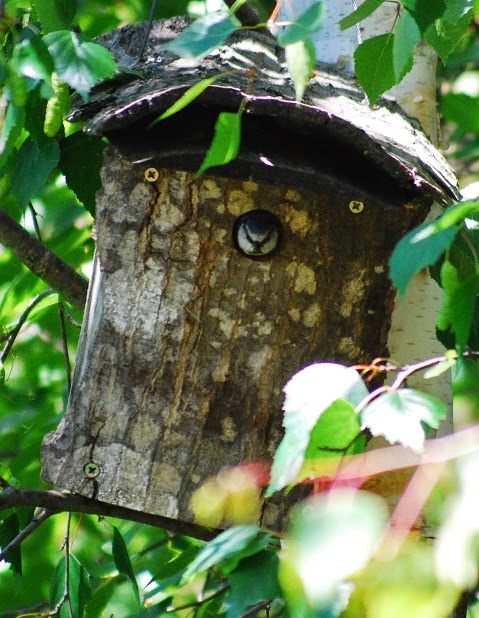 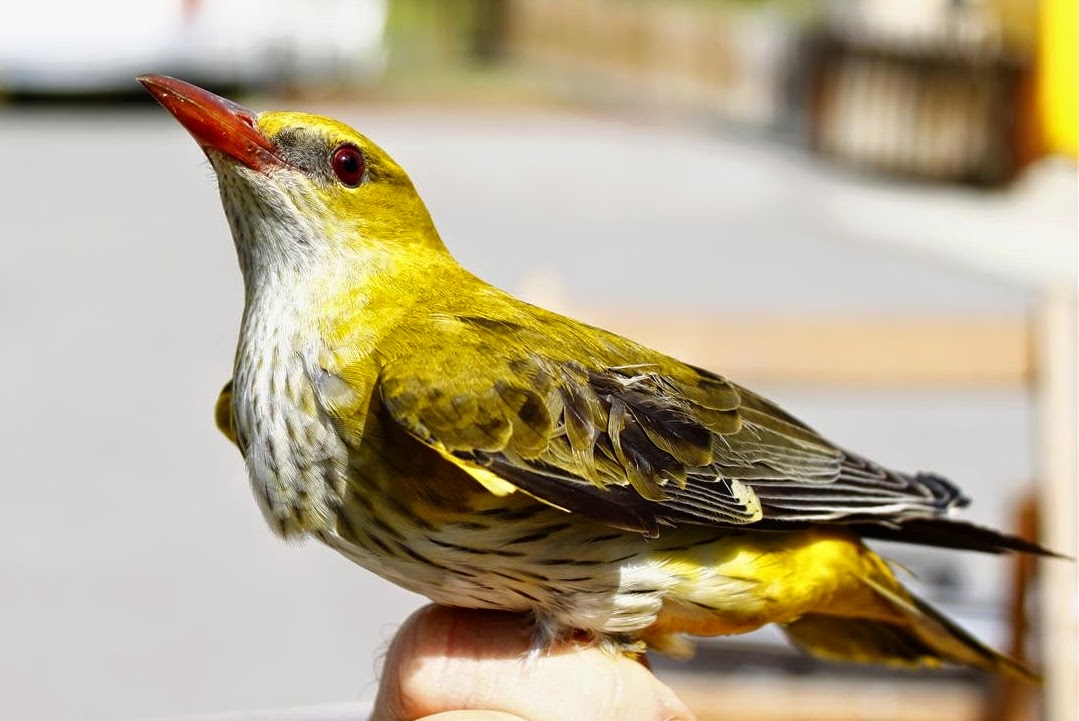 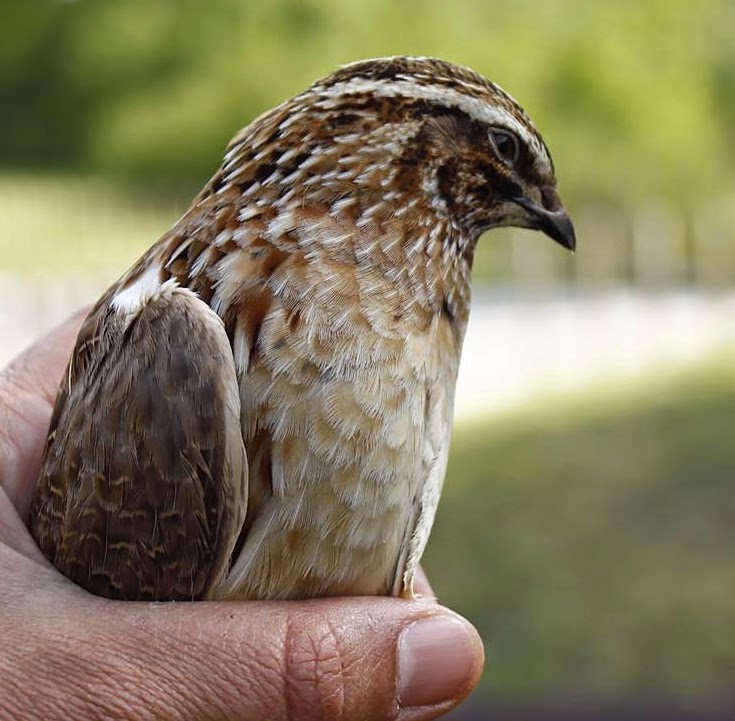 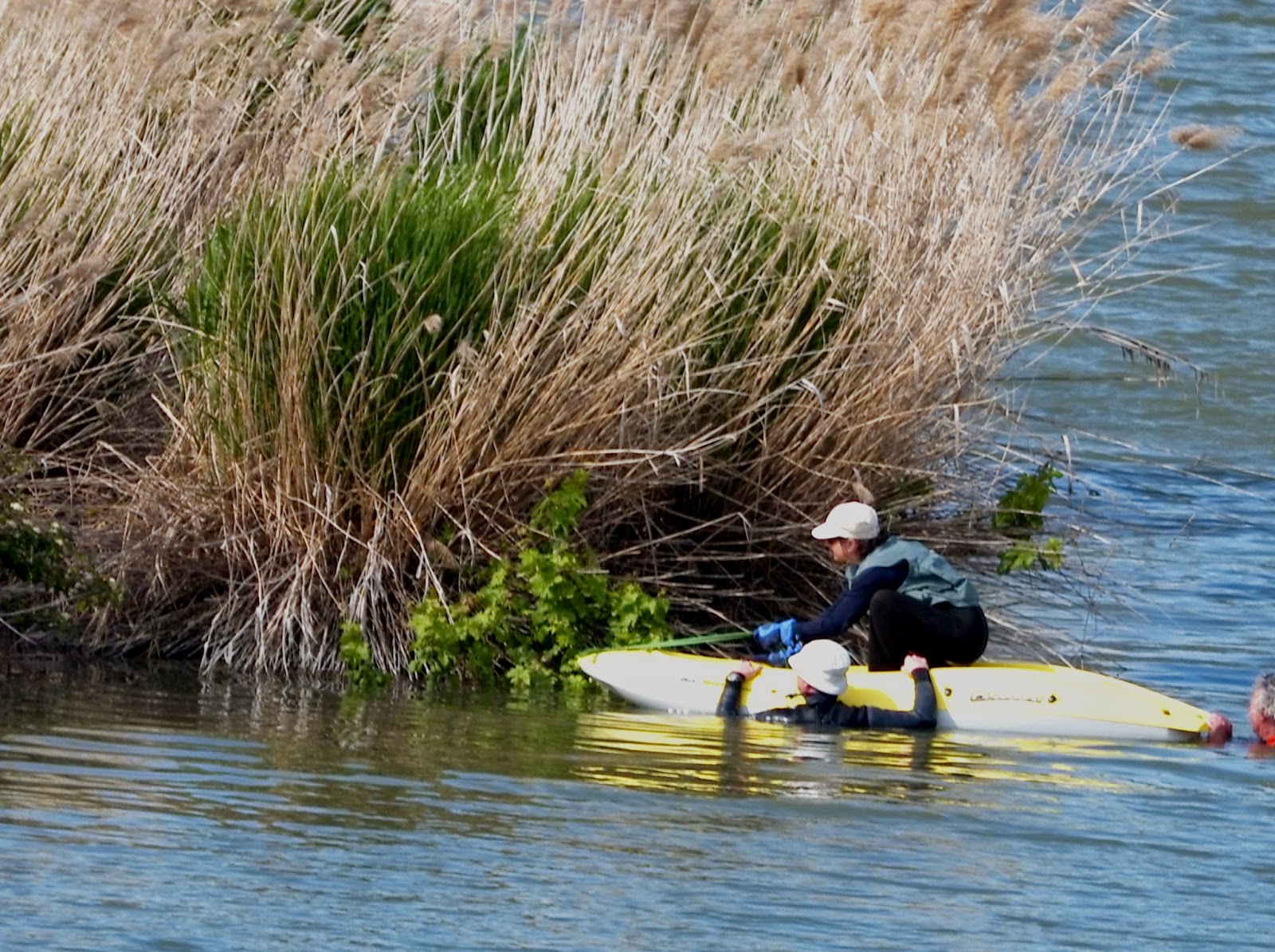 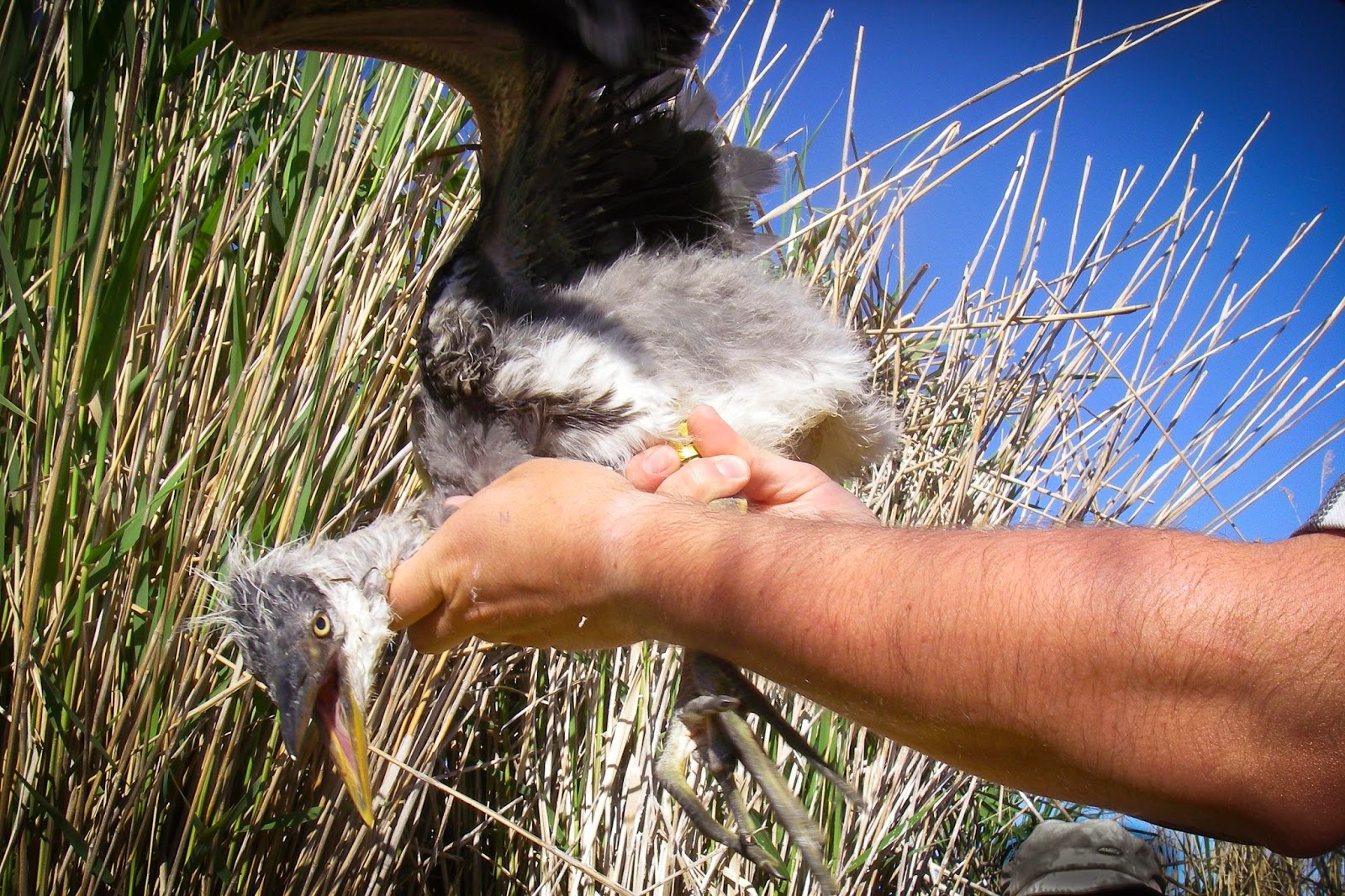 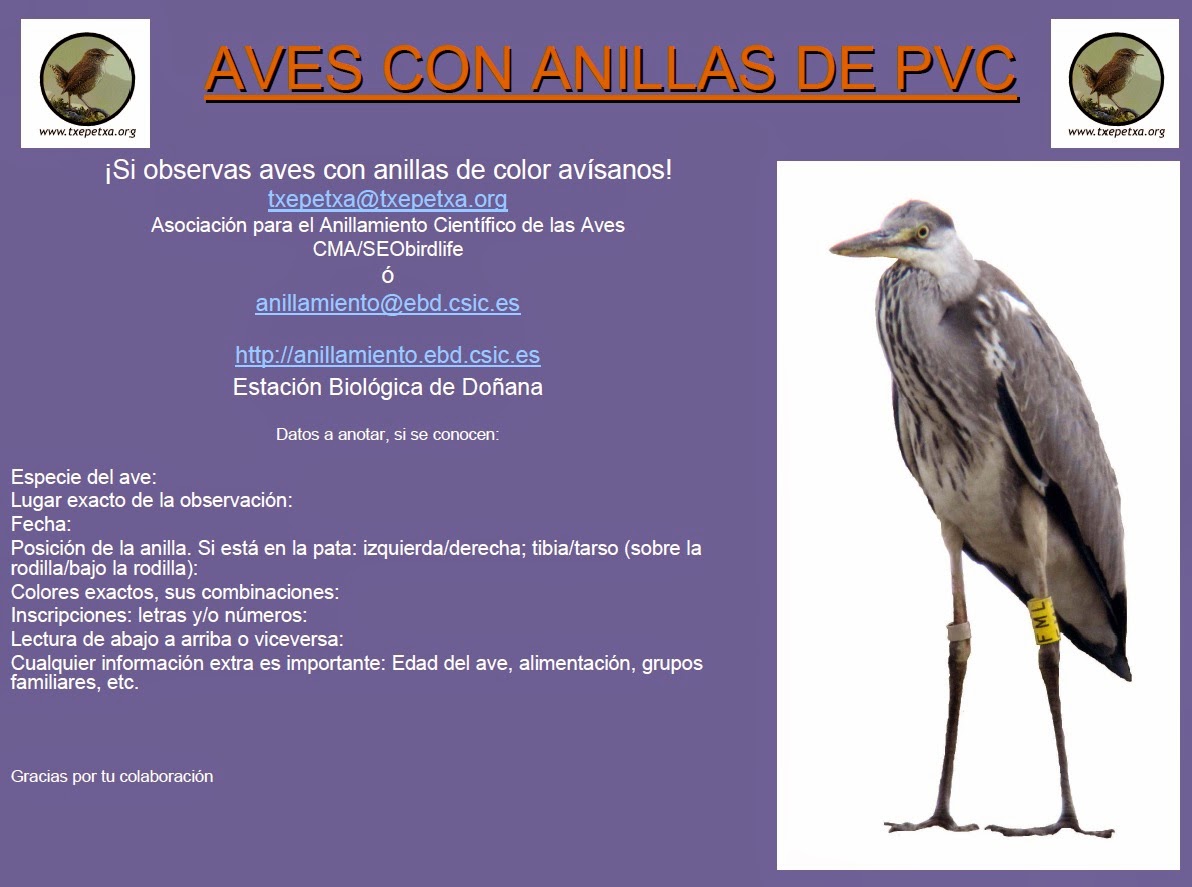 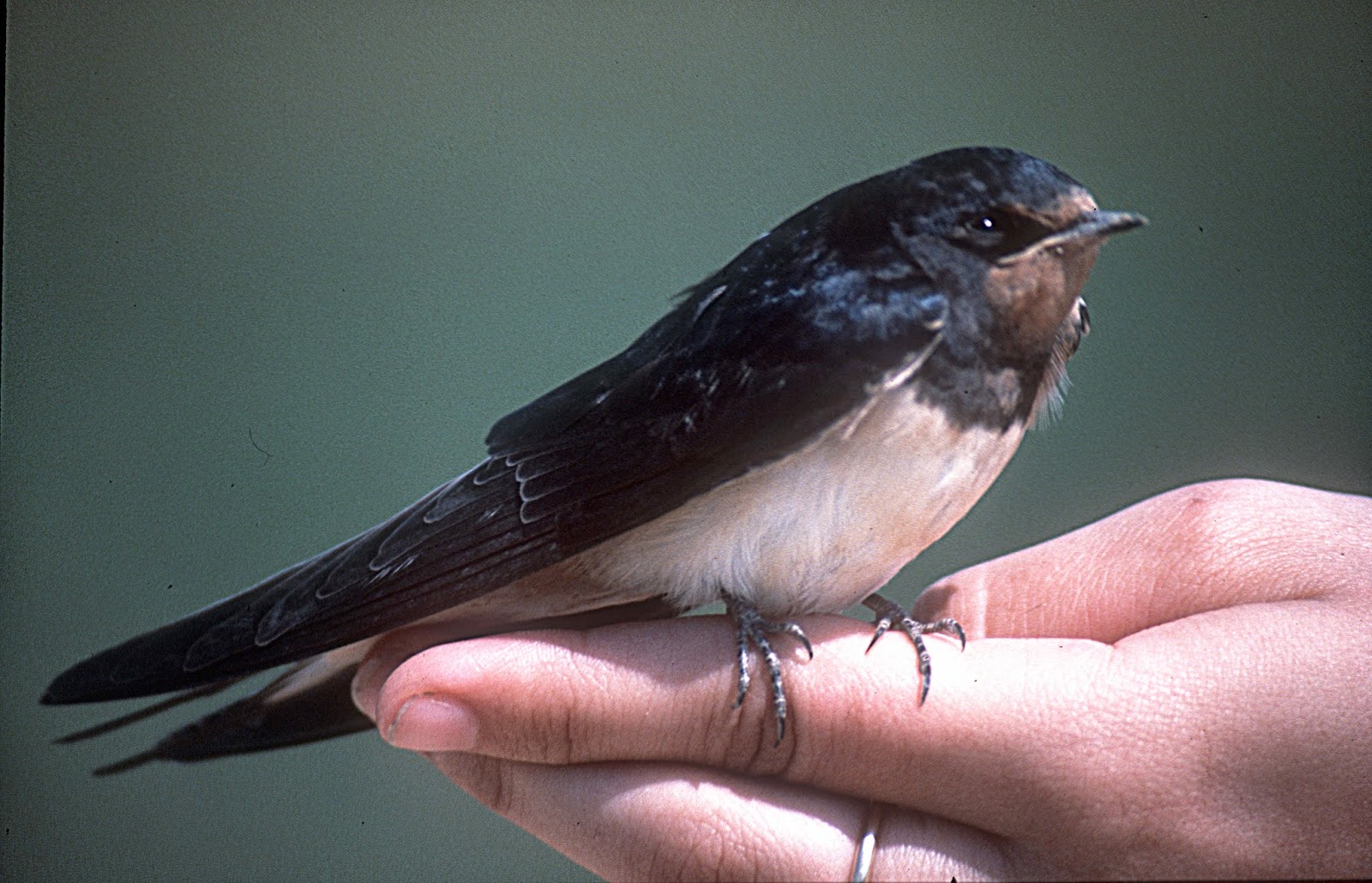 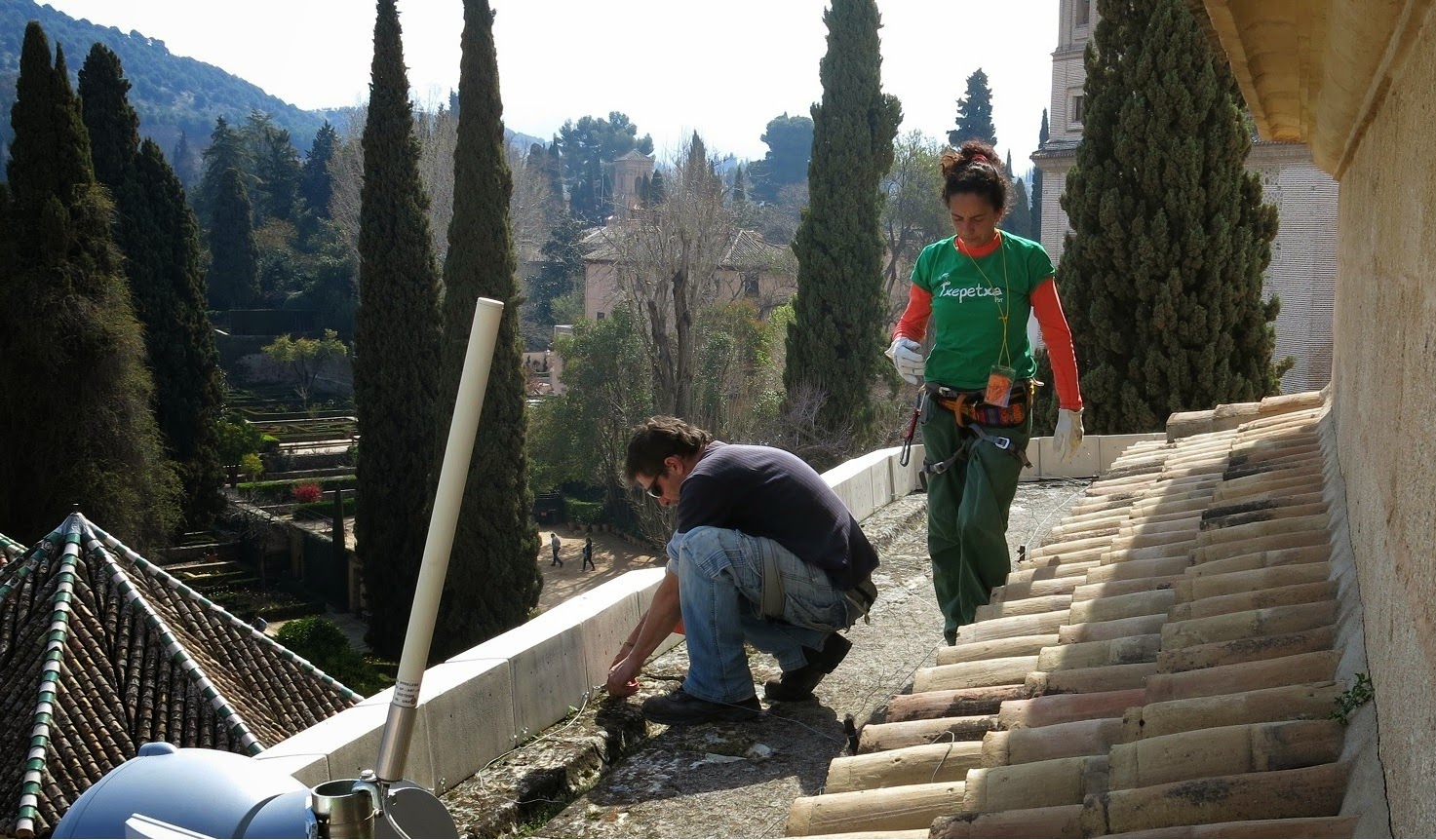 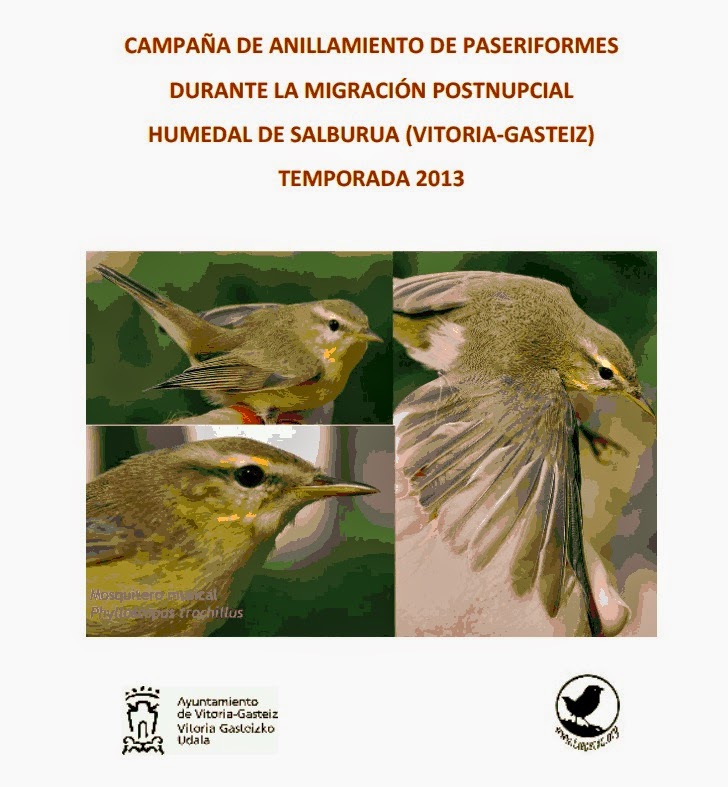 The Iberian Peninsula represents the southwestern boundary of Middle Spotted Woodpecker´s (Dendrocopos medius) distribution range, where this species shows a discontinuous distribution with potentially isolated populations (see Fig.1A & 1B; [1, 2]). It is currently well-known that one of its main Iberian populations is located in Izki Natural Park (Araba), but this important Middle Spotted Woodpecker population was not discovered until 1993 [2, 3].
After its unexpected discovery, the first censuses specifically devoted to establish the status of the Middle Spotted Woodpecker in Araba province were carried out in 1994 and 1995 [3, 4]. These surveys and unstandardized observations in later years revealed that the distribution of this species was primarily confined to Izki forest and its immediate surroundings in the southeastern part of the province (see yellow area in Fig. 1C). As a consequence, most subsequent research efforts on this species have been mainly focused in this core area [5].
In the last decade, however, several sightings suggested a breeding range expansion of the species from Izki to other nearby areas (e.g. Vitoria Mountains), where Middle Spotted Woodpeckers had not been detected before [6]. This fact was confirmed in 2010 during a study aimed at establishing its status, potential distribution and population density in the municipality of Vitoria-Gasteiz (see blue area in Fig. 1C; [7]). Additional observations, particularly in 2012 and 2013, further revealed the existence of Middle Spotted Woodpeckers in other distant areas (see question marks in Fig. 1C), such as some woodlands of the eastern part of Araba Plain and the southern slope of Elgea-Urkilla mountains, whence this species seemed to have disappeared two decades ago [3, 4]. 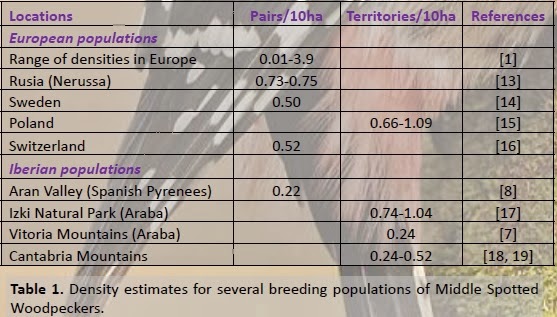  The current distribution range of the Middle Spotted Woodpecker in Araba is not clear after nearly two decades since the first regional census.
 Several observations suggest that, similarly to other conespecific populations [8, 9, 10] and other forest-dwelling species (e.g. Black Woodpecker Dryocopus martius; [11]), Middle Spotted Woodpeckers might be undergoing an increasing expansive process in Araba.
 A new comprehensive study in the province would be helpful to clarify its current status, which is particularly relevant given that the Middle Spotted Woodpeckers present in Araba constitute the main contingent of one Iberian peripheral population that might be locally adapted to supra-Mediterranean environmental conditions, a circumstance that would have important ecological, evolutionary and conservation implications [12]. 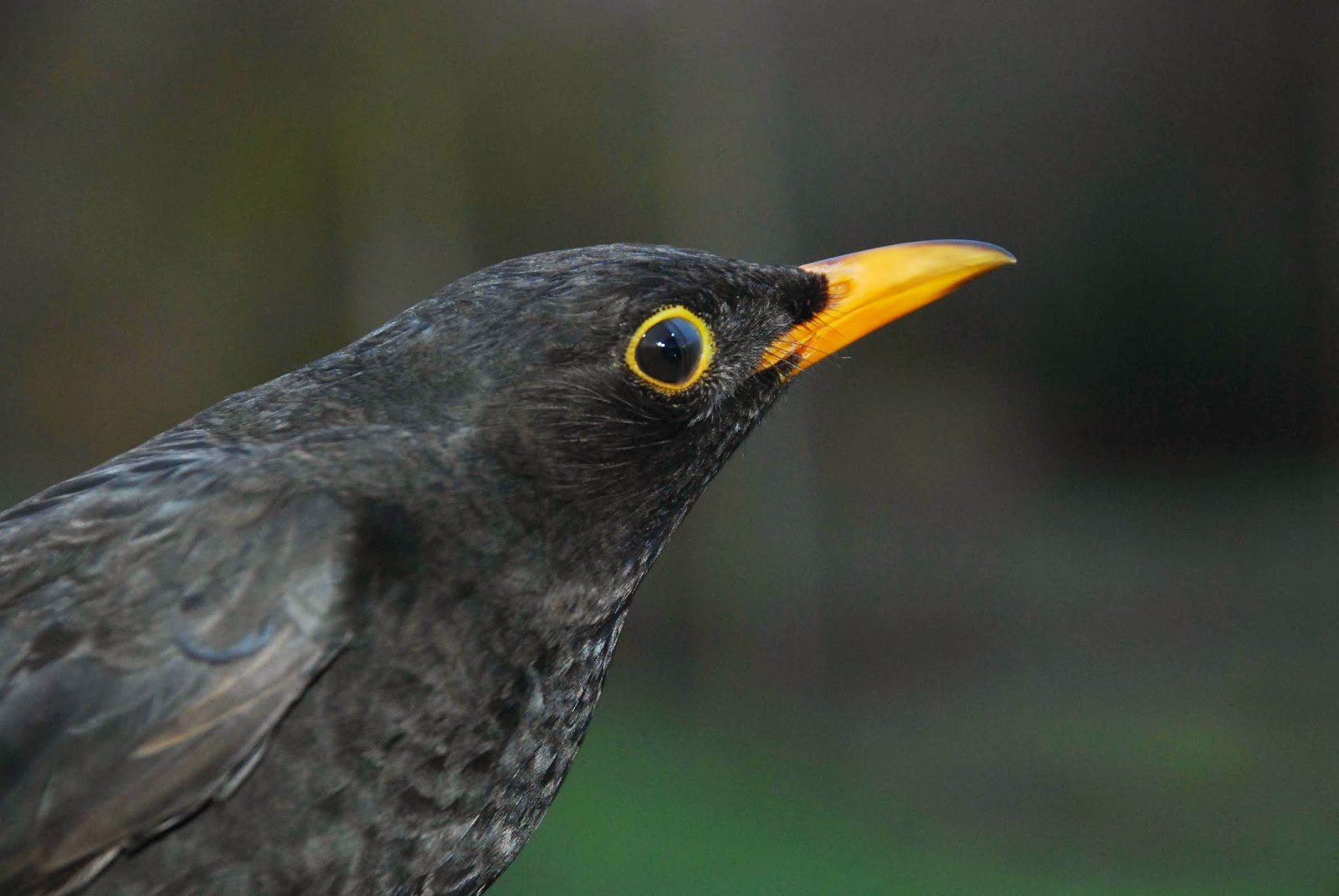 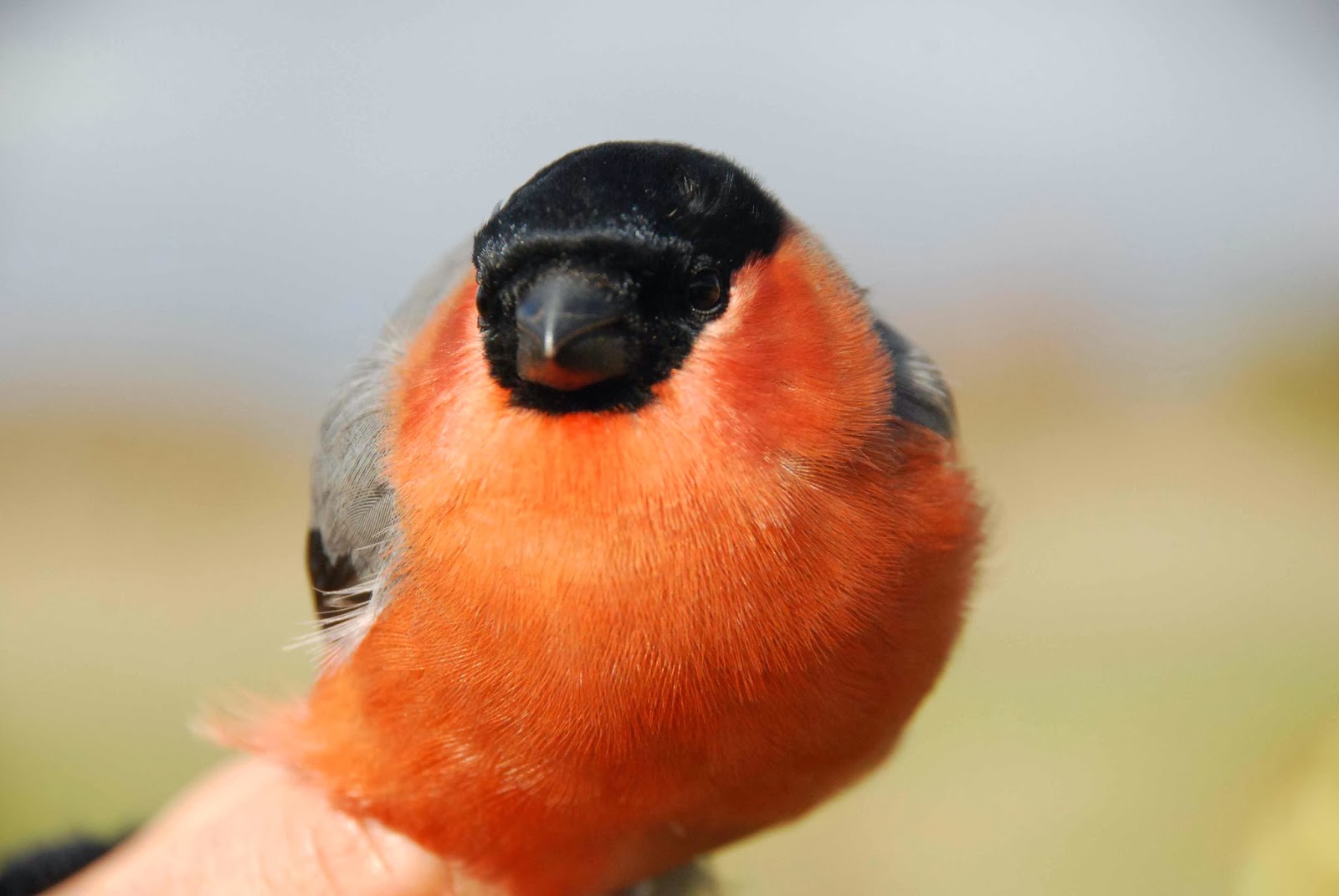 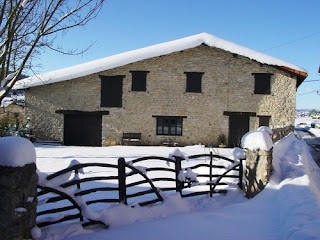 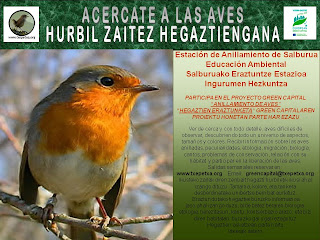